I spent a good time last night reconnecting with part of my history, it is a fine to wonder what it is I am talking about but indeed, I had another reconnection last night.

When I received the invite for the VIP screening of Efunsetan Aniwura, produced by Funmi Holder and Directed by Joshua Ojo with Clarion Chukwura playing the lead role; I felt it was going to be the same old ball game.

Efunsetan Aniwura was a powerful Iyalode of Ibadan; she was an international trade merchant and political leader; whose impact was felt across the Yoruba land. Iyalode is a title for the most powerful woman in the land by the king. The story has been handed down from generation to generation with the narrative changing as the story traveled in time.

I was hoping it was going to be the same old game of half-done jobs loaded with negative vibes. Let me save you the preambles and go right into the movie.

Shot in the deep recess of Ogun, Osun and Osun states, Efunsetan Aniwura is the story of love, hard-work and patriotism, mind you, this statement is from my experience of the movie.

The decision of the producers to tell the story in the Yoruba language laced with English language here and there; and the fact that it was subtitled in English is a big plus as it opens the window of folks who don’t speak the Yoruba language. Shooting an epic at a time like this is often considered a huge risk but this production has successfully proven the thought otherwise.

The Yoruba was carefully toned down to make the conversations sink in easily with millennials and non-indigenous Yoruba language users.

Original African fashion found its voice in this movie, as the aso-oke, adire and iyun were appropriately used. The combination of the fashion items takes you back to the 17th Century when Iyalode Efunsetan Aniwura reigned. The interior décor, straw mats and calabash were also important clues to the creativity of Yorubas of the era. 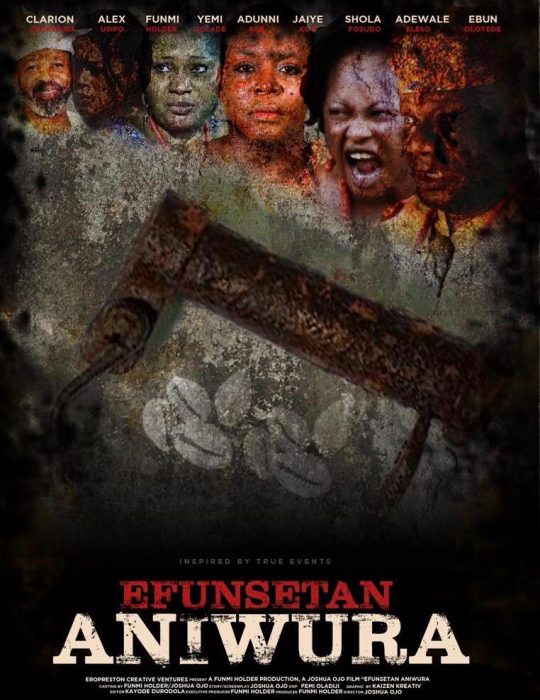 The actors brought all the characters to life in a more realistic manner, they appeared like everyday people that were imported from a time in the past. It is important to pay attention to the conversations as well because I sensed there were messages hidden within the comic relief displayed between the chiefs.

The flip side despite all the effort is that someone scenes were not convincing enough. The war scenes, especially the part with the Aare Latoosa killing the enemies was not real enough, I felt good that the use of special effects were not so much but more could have been done in those areas. My excuse for that would be that the producers didn’t want to expose too much violence to the audience.  African traditional religion was not portrayed in its full gloom, though the simple worship of Obatala was fair but for some of us, the religious practices of Efunsetan Aniwura would have been more insightful.

Though a tragedy, the production was able to close the screen with a happy ending, as Efunsetan, her daughter Ariyike and her unborn child met in the next life.

I must confess, the production was a well done job and no matter how much I try; you can only do yourself the good, by going to see this at the cinemas.