The Truth About Adoption 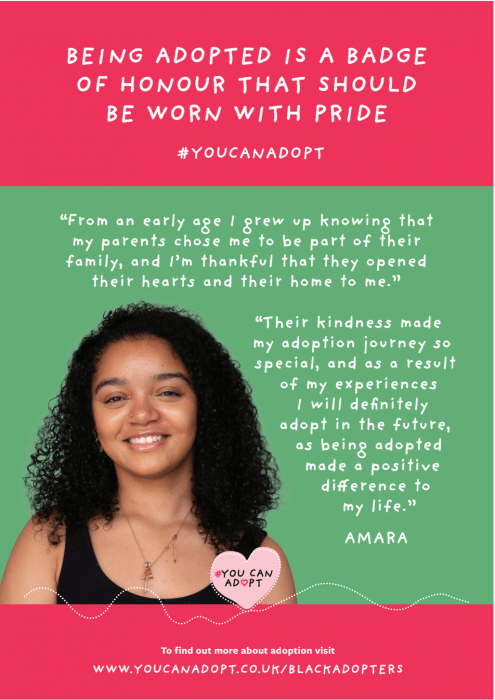 This National Adoption Week, as part of the #YouCanAdopt campaign, social care practitioner Sherifa Adenmosun helps to tackle some of the myths and misconceptions that may cause Black people to rule themselves out of the adoption process before they’ve even begun their journey.

Sadly, Black and Mixed Ethnicity children tend to wait longer to be placed for adoption, than their White counterparts. With fewer than 5% of adopters in England being of Black African or Black Caribbean heritage, there has never been a greater time for more Black adopters to step forward and make a change.

“There is no upper age limit, as many people in their 40s and 50s have successfully adopted children. The only age-related rule is that you must be over 21 years of age to adopt a child.”

Myth 2: You have to be married

“Being single or in a relationship and unmarried does not exclude you as a potential adopter. I’ve placed children with single adopters who are doing really well in their care, and they’re thriving,” shares Sherifa.

Myth 3: The adoption process is difficult and takes years

“The adoption process is now simpler and quicker than ever before and there is a lot more support available throughout the process – even after you have been matched with a child.

“Stage one is an eight-week process that is adopter-led and gathers information about yourself as a potential adopter(s),” explains Sherifa. “Stage two is a four-month process and is social worker-led. The social worker will be involved with gathering lots of information about you and is essentially a prospective adopter report that details everything about you and why you want to adopt.”

Myth 4: You have to be wealthy

“While your employment status and financial circumstances are evaluated as part of the adoption process, having a low salary or even being unemployed does not immediately disqualify you as a potential adopter.

“I’ve placed children with people who are dinner ladies, postmen – they’re certainly not wealthy by any means – but that’s not what we’re looking for,” says Sherifa. “In the first instance, we need people that have love, time and commitment to give to a child.”

Myth 5: You must be a homeowner or have a big house

“Whether you rent or own, live in an apartment or a house – you are still eligible to adopt. The size of your home isn’t an issue either, although ideally, it’s preferred that you have a spare bedroom for an adopted child because it’s important that they have a space which they can call their own.”

Myth 6: You can’t already have children living at home

“You are still eligible to adopt even if you have children living with you. If you already have birth-children, it is usually the case that an adopted child would be the youngest in the family by around 2 years at the point the adopted child is moving in with their family. However, there may be exceptions to this so I would encourage you to discuss your situation with the adoption agency.

Myth 7: You can’t adopt if you follow a faith and religion

The #YouCanAdopt campaign is being delivered from a cross-sector of regional and voluntary Adoption Agencies, and other key stakeholders around adoption in England. The campaign aims to ensure people have the correct information about adoption and do not rule themselves out based on false beliefs and assumptions.