Trust you had a great weekend. Mine consisted of a little rest and some family visits. The journey to Kabba was both mentally and physically demanding and I am glad I didn’t drive all the way or it would have been a different story.

The return journey was an early take off as I landed at the bus station 6:30am and was lucky to catch a car. Cars take fewer people and fortunately there is usually more decorum. The cost was a little extra, but the peace enjoyed cannot be quantified. It was as if the driver knew how harrowing my outward experience was when he chose a different return route. I was hopeful, I thought it could not be as bad as my last trip. For most part it was a good journey, except for a few bad roads along the way. Indigenes were seen on their way to their farms, some on bare foot walking while others made their way on bicycles. Some waved to me, some smiled and others seemed engrossed in their thoughts. Nature on these paths is very beautiful and green, and the air full of freshness.

We continued on our journey until suddenly the steering wheel started to vibrate unusually.  We were in the middle of nowhere. “Hope all is well,” one passenger enquired. “I think it is the shaft, and I only had someone check it yesterday,” the driver responded. We eventually managed to get to a village in Ekiti State and the driver stopped to take a look.  He confirmed the problem to be the shaft, and observed that it probably needed more grease, however there was no mechanic nearby.  So we continued on despite the problem.

At Ijebu-Jesha in Osun State we eventually found a mechanic workshop and drove the bus right in. As soon as the passengers descended from the vehicle, the mechanics got to work. They took out the shaft, and saw that the protective covering on the joint had given way, and it would need replacement in addition to the joint requiring some grease. The driver obliged and gave over the money. Forty minutes later, we were back on the road. I was left with the vision of the beauty of the hills surrounding the quiet town of Ijebu-Jesha. The serenity of the town struck me.   If I didn’t have meetings scheduled already back in Lagos, I’d probably stay there. There must be some fun behind those hills I thought to myself as our car eased onto the road, and promised myself that I will be back to find out

We continued until we hit Ife-Ibadan expressway and then the vibrations started again and you could see the disappointment on the driver’s face.   We felt it too, so much money spenton one trip. When we got to the popular Asejire dam, we pulled over as the vibration had gotten really bad. This time, I helped loosen the tire as the driver got ready to address the situation himself. As soon as I finished with the tire, I proceeded to savour my environment. Asejire dam is a water reservoir taken from River Osun, about 30 kilometers away from Ibadan city. It provides raw water to the Asejire and Osegere water treatment plants in Ibadan with a capacity of about 80 million litres per day. I am not sure if the Asejire still delivers up to this 80 million litres today, do you know if it does? Please send us a comment via our social media platforms if you know. 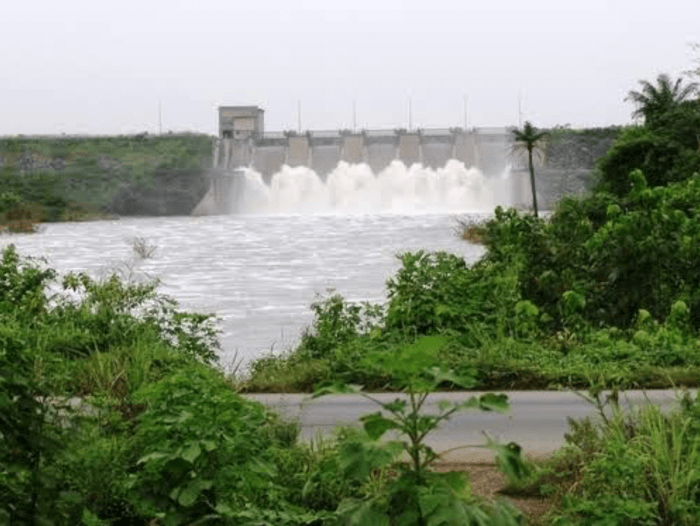 We had one more stop as we made our way out of Ibadan, the ancient city. Something then broke from underneath the car.   The driver picked it, observed and threw it away without caution. You didn’t need to ask question to know how bad he was feeling. We eventually got back on the road and we all chipped in with our consolatory messages at different points on the journey to Lagos. It was a rough trip on a smooth road ironically.

Lagos received me, my family was happy to have me back. On the other hand, I was too tired to engage immediately. I needed a quick nap.

Monday was a mix of experiences.   I set out for a session at the Brahma Kumaris Light House in Ilupeju, Lagos and met with unusually busy traffic as I hit the highway. I was certainly going to be late for this session but I decided to continue all the same to reschedule. Just as I was contemplating the next steps, a call came through from Aare Oladeinde Ariyo. He wanted to know where I was headed and I told him Ilupeju.  He said it was coincidentally the same area as he was going to Coker road, two streets away from my destination.

We stopped at the Light House and met with my instructor Sister Olamide.  interestingly, she and Aare Ariyo had met on a few previous occasions and so she offered him a space too. Meanwhile, Aare’s purpose was to visit National Examination Council (NECO) to correct his daughter’s secondary school application.  His school had erroneously entered Kings College for his daughter instead of Queens College Lagos. Kings College is for boys. Ayomide, Aare’s daughter is obviously a girl. A brilliant girl with many talents.   She scored 182 out of the total exam score of 200 – one of the highest scores in the National Common Entrance Examination. We could not resolve the matter as planned and thus returned to the Light House where we went through our first session in meditation. We left with a question, “Who am I?” Ask yourself too, it may just mark the beginning of your journey to self realization.

I am pretty sure it is going to be a great week for us, however, please remember to make someone smile today.