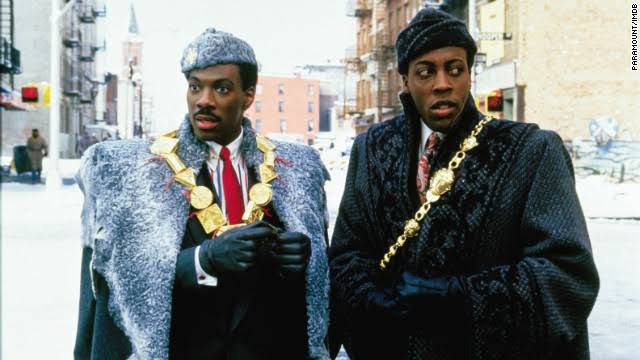 It’s been over 30 years but, in just a few months, patient fans will finally be gifted with the long-awaited sequel to Eddie Murphy’s Coming to America. The film, appropriately titled Coming 2 America, will see Murphy’s Prince Akeem and Arsenio Hall’s Semmi leave the African nation of Zamunda and return to the states to find the son Akeem never knew he had. In addition, the film will feature a number of returning cast members and a host of new characters. A highly anticipated film like this is definitely faced with gargantuan expectations, and this became very real for Arsenio Hall during a social media encounter with a fan:

“When you do something like this, it’s really all about storytelling. The story, the continuation of the story, is really perfect and wonderful. I love that.

I’m a big social media nut. Eddie’s not so much into social media. One day we’re sitting at his house, and I’m looking at something. I’m reading different stuff. I guess I said something like, ‘Wow.’ He said, ‘What?’ It was somebody tweeting saying, ‘Don’t y’all fuck it up.’ I was like, ‘I never thought about it that way.’
I never thought [about it like that]. Here’s what I got out of the entire tweet: ‘That’s our movie. My daddy used to make us watch that once a year like The Wizard of Oz at the house.

Well, the fan certainly didn’t mince words when letting Arsenio Hall know how much he was expecting of the 2021 follow-up. Hall went on to admit to complex that he had honestly never considered the weight of returning to such a beloved franchise before seeing that message:
‘I was like, ‘Eddie.’ He said, ‘First of all, put that fucking phone down, man. Somebody got to you like that? Put your fucking phone down.’ But I had never thought about the fact that it means a lot to people, and they put that in our arms and say, ‘Care for it and do it right, y’all.’ That shook me up, but I’ll tell you what it did. It made me go read the script three more times in a row and say, ‘Let me get ready for this shit.’

By the sound of it, the message didn’t make Hall nervous as much as it made him change the way in which he stepped into Coming 2 America. He seems to know the challenge that lies before him and his castmates but, at the end of the day, he believes the movie will live up the hype:

‘You want the surprise of the barbers and all that kind of stuff, and how old they are, and what they’re doing now, but you also, if you can, want to slide something new in on them. I started looking for that opportunity. Basically, that tweet made me say, ‘Get ready, motherfucker.

You got to do this.’ I wanted to put my foot in this one. Everything worked out good. Everybody brought their A-game every day, giving 100 percent, on time. When you see the outtakes, you’ll realize how much fun we had. You’ll watch the outtakes and say, ‘They shouldn’t have even paid them, because they had too much fun. That’s not no job.’

Arsenio Hall chose a great way to look at the situation, as he isn’t succumbing to any kind of pressure. Because let’s be honest, at the end of the day, all the cast and crew can do is try their best and make what they believe is a quality movie. It likely won’t please everyone, but that in no way means the film won’t be good.
Many would agree that Coming 2 America has the ingredients to succeed, with a game cast and a talented director in Dolemite Is My Name’s Craig Brewer. It’ll be fun to see what the crew has planned for the upcoming comedy