Hi Folks,
I guess we are all set for the festivities now. My week was fun-packed as I had quite a few events that brought loads of great people together.

The roads have become so busy these days that I wonder if they have just unleashed thousands of extra vehicles on our ever-busy roads. Last Thursday afternoon as I drove towards my out of town abode, there had been an accident. The evacuation process had brought the traffic to a crawl “here we go again”. Suddenly, I felt a bump from behind, pushing my car a little forward. I stopped right there in the middle of the road and got down to see if there was any damage to my car, just a little scratch to the bumper. To my surprise, the guy was sat back in his car looking like nothing had happened, which made me furious so I yelled at him to get down and see the damage, or at least show some remorse. Then, the truth was exposed; he muttered a drawl of a sorry. Something was clearly wrong, so I went closer, and then the smell of alcohol took over. He was drunk; the road law enforcer was drunk and was driving on his way back from work. This was one of the guys saddled with the responsibility of bringing sanity to our roads, his jacket hung on the head-rest of his seat, his cap on the driver’s seat and his constant blinking in an effort to stay awake. Following my discovery, a crowd had gathered to see what was going on and they were already taking photos and videos of the poor public servant. All I could say was “how could you do this to yourself?” And I left him to fate.

A few days after, his video was all over the place. Poor guy, I wonder if he still has access to his uniform any-more. 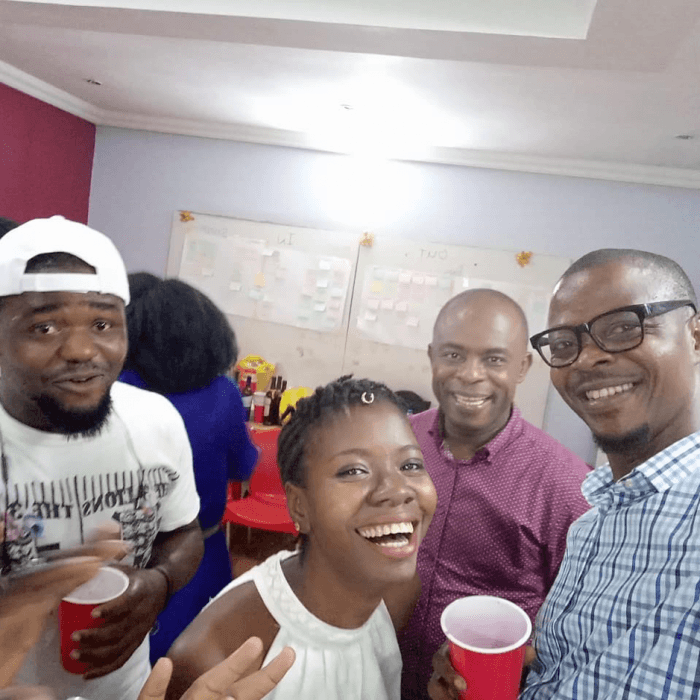 Thursday was fun; I joined my colleagues at Loudthotz Open Poetry Reading for our last reading for the year and end of the year party. Wordsmiths were armed with their phones and ready to play around with words, there was food, drinks and sweets to go with the reading.
Dr. Ode and his wife were around, he is our encyclopedia of poetry, he has probably read every published poet. Tunji Raphael was present, Kemi Bon the birthday girl brought more food items to keep our mouths busy, Erhio, queen of rhymes was the coordinator. Chiamaka was there, Omolade was my guest, the two Ifeanyi’s were around, Soonest, the dean of loudthotz, Henry the photo man, Larios, and a bunch of other people whose names have gone into hiding in my head. We read, we analyzed, we argued and we brought out the kids in us as we hustled for chocolate in the word contest that was keenly put together by Joy and what’s Kemi’s sister’s name again? Something I find amusing is the kind of bond that we share as a group, could it be the power of words? Pray tell if you know.

Then Saturday took me to Ibadan. My niece, Derayo Animashaun of De’rayo fame had invited me to the South-West Fashion Summit; I spoke about collaboration between the fashion industry and the media. The title was, “The media, what would the world be without it?” Everything kind of revolves around the media and so it was easy to engage with the audience. The fact that I was introduced as being part of the YANGA! family made the presentation more special. I spoke for about twenty minutes. The conversations with the guests after my presentation took more than an hour as participants asked me questions on various aspects of media. I finally met Mrs. Atinuke Smith of Datina Designs, in whose honor the Summit was created in the first place, I met her friend, Mrs. Oladele, who is a writer, and I also met Pastor Francis Madojemu of ibridgehub.

The height of the event was the runway show where my niece and a few other designers showcased their apparels, bags and shoes. African fashion is fast on the rise, judging by what I saw on the runway.

What was your experience like this past week, have got an event or unique experience coming, leave a note in the comment box and let us rock it together? As you go about having fun, please remember not to drink and drive. Till next week, make someone smile at every opportunity.