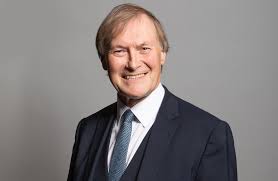 British lawmaker David Amess, a member of Boris Johnson’s ruling Conservative Party, has died after being stabbed several times at a constituency meeting east of London.

Amess, 69, a Member of Parliament who represented Southend West in Essex, was attacked at around midday Thursday by a man who walked into a meeting with voters from his electoral district being held in a Methodist Church in Leigh-on-Sea.

“He was treated by emergency services but, sadly, died at the scene,” Essex police said.

A 25-year-old man was quickly arrested after officers arrived at the scene on suspicion of murder and a knife was recovered.”

The UK’s Counter Terrorism Command will lead the investigation into the murder, police said later Friday. “It will be for investigators to determine whether or not this is a terrorist incident. But as always, they will keep an open mind,” Ben-Julian Harrington, Chief Constable of Essex Police, told reporters.

Aerial footage showed multiple police officers outside the church and an air ambulance at the scene. A large cordon extended down Eastwood Road, where the church is located, with members of the public gathering behind it and multiple side streets closed off.

The killing was another grim moment in Britain’s political history. It marks the second murder of a sitting British lawmaker in five years, after Labour MP Jo Cox was killed in her constituency in 2016, and has reignited discussions about the safety of the UK’s elected officials.

Boris Johnson was joined by all of his living predecessors in expressing shock, and lawmakers from every corner of the political spectrum spoke of their sadness, their concern, and their anger after another of their colleagues was killed while meeting with his constituents.

‘A terrible day for democracy’

“David was a man who believed passionately in this country and in its future,” Johnson said. “We lost today a fine public servant.”

The leader of the main opposition Labour Party, Keir Starmer, wrote on Twitter: “Horrific and deeply shocking news. Thinking of David, his family and his staff.”

Former Prime Minister David Cameron said Amess was “a kind and thoroughly decent man” and “the most committed MP you could ever hope to meet.”

“Words cannot adequately express the horror of what has happened today. Right now, my heart goes out to David’s family,” Cameron said. Cameron’s successor Theresa May added the news was “heartbreaking” and “a tragic day for our democracy.”

She described Amess as “a decent man and respected parliamentarian, killed in his own community while carrying out his public duties.”

And former Labour leader Tony Blair said in a statement to PA Media: “David and I came into Parliament together in 1983. Though on opposite political sides I always found him a courteous, decent and thoroughly likeable colleague who was respected across the House.”

“This is a terrible and sad day for our democracy,” Blair said.

Flags outside Parliament were lowered to half staff after his death.

Labour London Mayor Sadiq Khan called Amess “a great public servant” who “loved being an MP.” Sajid Javid, the UK’s Health Secretary, called him “a great man, a great friend, and a great MP killed while fulfilling his democratic role.”

Amess entered Parliament in 1983, initially representing the Basildon constituency. He served continuously in the House of Commons since then, making him one of the longest-serving lawmakers in the chamber.

Amess was knighted in 2015 for his political service. He supported Britain’s departure from the European Union, and his main areas of expertise were animal welfare and pro-life issues, according to a biography on his website.

In March, Amess asked a question in Parliament about how to stop “senseless murders” with knives, after a teenager in his constituency was killed in a knife attack.

He was married and had five children.

Within Britain’s political bubble and beyond, the murder dredged up painful memories of the shocking killing of Jo Cox five years ago.

That incident rattled the nation and led to calls for lawmakers to receive personal protection when in public — a sentiment that re-emerged Friday following Amess’ death.

“All elected representatives must be able to go about their work without the fear of physical or verbal attacks,” Amess’ colleague, Conservative MP Eleanor Laing, said in a tweet on Friday following the stabbing. “What has happened to Sir David Amess in Essex today is unforgivable.”

Amess was not considered a controversial politician, and despite the length of his tenure, he was not a widely known political figure in the UK.

In a book he wrote last year about being an MP, Amess said Cox’s murder was “totally unexpected” and the event had changed the way MPs interact with members of the public, particularly in relation to constituency surgeries.