Mud Wash on a Saturday

Have you ever set out on a good weather Saturday for an event only to be washed out with muddy waters upon reaching just a few meters from the venue?

It was a Saturday that had enjoyed much anticipation.  My sister had invited me to the wedding ceremony of my nephew and his heartthrob. The date was locked in my calendar and nothing was going to change.   June 15th 2019 it was.   My white kaftan was properly dry cleaned and ironed. The event would kick-off with the church solemnization followed by a reception at another venue. Just before the hour of solemnization, rain began to pour heavily.   People were scampering for the nearest shelter. I felt lucky to have the fortune of riding in a car, feeling sorry for the folks being soaked by the deluge, but what could one do?

I arrived at the church in the company of my wife, by which time the first pouring of rain had subsided. The premises of the particular auditorium were flooded and we had to remove our shoes to make it into the room without damaging them. We arrived just in time to witness Tolulope Obatolu (my nephew) and his wife’s, Bolafunmigbe Olatawura marriage. It was a brief event with, with loads of hymns and worship. 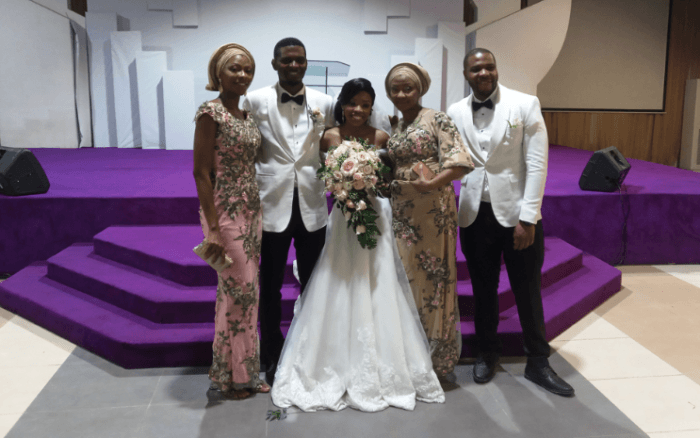 We proceeded to the venue for the reception as another round of rain began to pour. Just like the first soaking, I didn’t think much of it until I got to the second venue. By this time, the downpour had subsided and reduced to drizzles. The car parks were full and we had to park by the road-side and proceed to the venue on foot. Just as I got down, the worst rainfall happened.

Despite the narrowness of the parking spot, a driver came at full speed, oblivious of a pothole right by my side. By the time he hit the pothole with the muddy water in it, I was already in shock and my reflexes shut down. The tire fell into the pothole in super slow motion, water splashed with the speed of light and poured right onto me.  Some muddy water even spilling into my mouth. My clean white kaftan eventually became brown with small patches of white.   My glasses were not spared as I became partially blinded by the muddy brown paste on the lenses.

I was devastated with thoughts of whether the stains would be washed from my clothes and considered going home to change and then return to the venue or just rule the event out altogether. I headed home straight away, cursing the driver as I drove along. I got home, took a shower, changed and soaked my kaftan then drove back.   My wife, Folashade, was there all the while to calm me. It was Tolulope’s wedding, I would certainly not abandon this important event because of a simple mud wash, the man in me spoke finally. 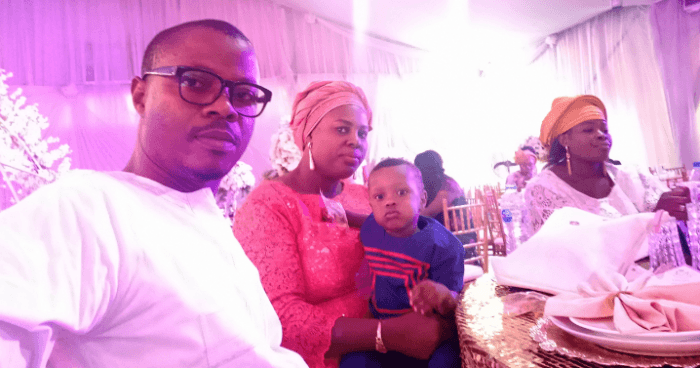 However, the beast in me spoke, when area boys approached me at the venue for a parting toll as I parked my car and made to proceed to the venue. “Baba, parking!” he said. I looked at him like I didn’t understand and he repeated himself. “Maa jee ni tutu”, I barked at him. For the benefit of those who do not understand the Yoruba language, “Maa jee ni tutu” means I will eat you raw. He walked away, mumbling whatever to himself. It was already a long time into the ceremonies but there was still plenty of fun to catch up with. My other sisters were already seated when we returned.  Sister Bunmi Olorunhundo and her husband was there, Mr. Gbenga Alepa, Femi Alepa and his wife and Segun Alepa all attended. Segun Benson and Segun Alepa were around handling different parts of the event. Bimpe, Kike and Femi, all siblings of the groom were around for support. It was a family reunion of sorts, as family members that I haven’t seen in years were present. As usual, after all the cake and small chops I requested for my amala and gbegiri. 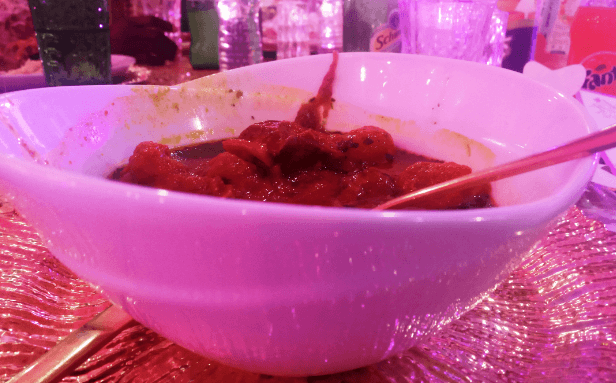 Due to the rains, I decided not to attend the other events lined up for the day as the roads were going to be too busy.

I am looking forward to another great weekend and can assure you of more gists in the next edition. Remember to make someone smile today, wherever you may find yourself.