An Electric Night in Lagos

My experience from the past week was a mix of struggle and excitement. I had a lot of fun but it was a struggle to get to where the fun was at every corner. Why? Because it’s the last month of the year and in a busy city like Lagos…it’s crazy.

It was like any other day in Lagos, as a hustler and man of faaji, I had set out for money making in what was supposed to take less than 12 hours. It didn’t quite turn out that way, as I got stuck at the Tincan Island port where work had taken me. My assignment ran late into the night and I couldn’t find a conducive place to lay my head for the night. I thought of sleeping in the car but I was advised against it. My handy man suggested we go to a nearby island where we could have some fun as well as find somewhere to stay. So, off we went to the river bank to get a boat to take us across. Two minutes later (or thereabout), we were at the shore…we headed straight into the narrow streets, red dots glittering from dark corners as some unknown characters smoked the night away.

Our first stop was an unpainted building, nothing to indicate that it was a hotel, we knocked on the central door and a funny looking fella appeared to say there is just one room left and he requested a ridiculous price. We needed more than one room and the price was actually absurd, so we bounced. The next stop was bubblier, there was a bunch of young folks smoking and drinking as music blared from cracked speakers. We met the manager, who interestingly shares my name, his rooms were small and smelly but it seemed safer than the previous one.
We paid, and decided to join the fun. Apparently, Dada, my handyman was a regular there and knew virtually all the key people, he even had a girlfriend who was already waiting for him. All eyes were on us, as we were total strangers, (except for Dada). He told the manager I was a military officer on a special assignment (smiles), we drank into the morning, the girls swung all they could, hoping to lure the officer into their den, but I had far too many things on my mind for canal activities. In between, something odd happened, Sandra, who Dada introduced as his girlfriend had it going with another guy who coincidentally was around too. Of course, Dada wasn’t aware of anyone else (or he didn’t care to know), as he went about showing his affection to her openly.

Suddenly, a tall lanky man shows up and drags the young lady off her seat, without warning, Dada landed him a heavy slap and a fight ensued. Sanity returned after I barked at the top of my voice for them to stop, you could literally hear the silence that followed my order. I never knew people had so much respect for military officers. The assailant on recovering from his shock, went flat on his belly pleading that he was sorry. I reprimanded both of them and told him to go and sin no more. Dada was left with an open wound on his arm and his assailant had lost a tooth and had an eye partially closed. Our groove ended around 2:40a.m and I retired to my room at 6am to sleep with one eye open subconsciously praying for Dada’s assailant not to consider a reprisal attack.

It didn’t take much time to complete my task and I told Dada the dangers of engaging in fights and unprotected sex. 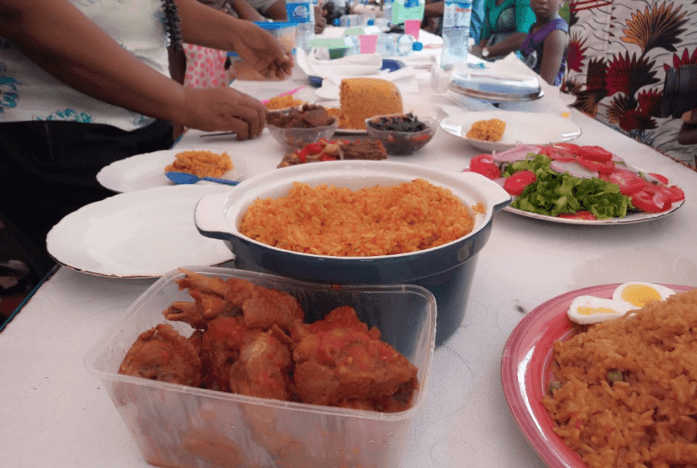 Remember the never ending Jollof war that is fast spreading across the world? Well, my friends Olaseinde Ariyo and Kemi Ilori dragged me into this war real time. I found my way to Adeyemi Bero Auditorium, Alausa, Lagos, venue of the Nigerian Rice Festival. The smell of Jollof rice was the first to disarm us as we arrived, to keep us energized however, a portion of party Jollof rice and beef was served with chilled water. The warring parties would be facing each other with recipes and condiments as they contest to win the Jollof rice war. All the contestants fought well, in the end, Torisemugbone Mary won the war with her native Jollof rice and Banga rice. It was another opportunity to connect with my old friends, Malley Abubakar, Dapo Simon Ajeniya and Bode of Woodpecker fame. It was also a chance to confirm that no one cooks Jollof rice like Naija.