Trust your week started off real good, not quite at my end as the first day of the week was fraught lateness and loss of productive time to traffic. How so, did you ask?

I left home as usual at 9am as usual with the belief that I’d arrive the office ahead of my 11am Monday morning meeting.  I wasn’t so luck, I spent the usual half an hour crossing from my end of town into Ikeja but from the highway exit to my office took over 30 minutes setting me back 15 and earning me a verbal query.

It was much ado until I traveled further into the city of Lagos, I saw wonders as people went to their destinations on foot. The sidewalks were filled with citizens trekking all the way after waiting in vain for a means of transportation to reach their destination. There has been serious backlash against the Lagos State government for suspending the activities of commercial motorcycles and tricycle on major roads in the mega city.

Horses to the rescue 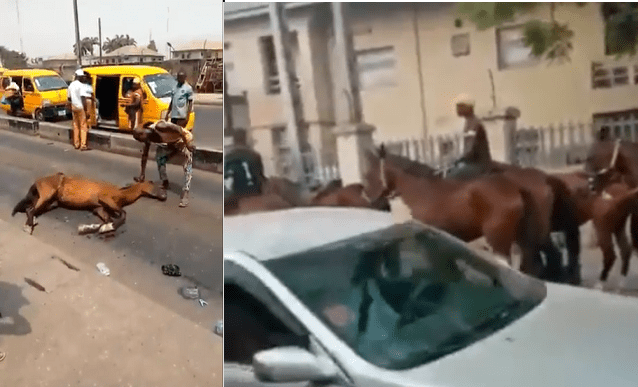 Twitter had its fair share of the rant as horses were being paraded as alternative means of transportation in the city, even a collapsed horse was seen. A particular tweet of interest was a spoof commercial that featured the governor’s picture and two celebrities with the hashtag #LagosIsWalking, see below;

A message from Sanwo Olu to you fellow lagosians 😂😂#LagosIsWalking pic.twitter.com/Y2ydvnjvS6

I needed to attend a radio program and seeing the heavy traffic on all routes, I decided to join the trekkers. At first it was fun but in the end I was all sweaty and tired. The debate on whether the suspension was good or not has been raging since the 1st of February 2020 announcement by the state government. You may not be in Lagos but you probably have a friend or two who are for or against, please share your voice with them by commenting on this.

So much to say about this #LagosTreks but better to just leave it at this point to let you share your thoughts.